Christian Dior was born in Granville, a seaside town on the coast of Normandy, France, the second of the five children of Maurice Dior, a wealthy fertilizer manufacturer (the family firm was Dior Frères), and his wife, the former Isabelle Cardamone. He had four siblings: Raymond (father of Françoise Dior), Jacqueline, Bernard, and Ginette (aka Catherine). When Christian was about five years old, the family moved to Paris, France, but still returned to the Normandy coast for summer vacations.

Dior's family had hopes he would become a diplomat, but Dior was artistic and wished to be involved in art. He was gay, though not openly so. To make money, he sold his fashion sketches outside his house for about 10 cents each. In 1928, Dior left school and received money from his father to finance a small art gallery, where he and a friend sold art by the likes of Pablo Picasso. Three years later, after the death of Dior's mother and brother and a financial disaster in the family’s fertilizer business, during the Great Depression, that resulted in his father losing control of Dior Frères, the gallery had to be closed.

From 1937, Dior was employed by the fashion designer Robert Piguet, who gave him the opportunity to design for three Piguet collections. Dior would later say that 'Robert Piguet taught me the virtues of simplicity through which true elegance must come.'One of his original designs for Piguet, a day dress with a short, full skirt called 'Cafe Anglais', was particularly well received. Whilst at Piguet, Dior worked alongside Pierre Balmain, and was succeeded as house designer by Marc Bohan – who would, in 1960, become head of design for Christian Dior Paris. Dior left Piguet when he was called up for military service.

In 1942, when Dior left the army, he joined the fashion house of Lucien Lelong, where he and Balmain were the primary designers. For the duration of World War II, Dior, as an employee of Lelong — who labored to preserve the French fashion industry during wartime for economic and artistic reasons — designed dresses for the wives of Nazi officers and French collaborators, as did other fashion houses that remained in business during the war, including Jean Patou, Jeanne Lanvin, and Nina Ricci. While Dior dressed Nazi wives, his sister Catherine (1917—2008) served as a member of the French Resistance, was captured by the Gestapo, and sent to the Ravensbrück concentration camp, where she was incarcerated until she was liberated in May 1945.

On 8 December 1946 Dior founded his fashion house, backed by Marcel Boussac, a cotton-fabric magnate. The actual name of the line of his first collection, presented on 12 February 1947, was Corolle (literally the botanical term corolla or circlet of flower petals in English), but the phrase New Look was coined for it by Carmel Snow, the editor-in-chief of Harper's Bazaar. Dior's designs were more voluptuous than the boxy, fabric-conserving shapes of the recent World War II styles, influenced by the rations on fabric. He was a master at creating shapes and silhouettes; Dior is quoted as saying "I have designed flower women." His look employed fabrics lined predominantly with percale, boned, bustier-style bodices, hip padding, wasp-waisted corsets and petticoats that made his dresses flare out from the waist, giving his models a very curvaceous form.

Initially, women protested because his designs covered up their legs, which they had been unused to because of the previous limitations on fabric. There was also some backlash to Dior's designs due to the amount of fabrics used in a single dress or suit. During one photo shoot in a Paris market, the models were attacked by female vendors over this profligacy, but opposition ceased as the wartime shortages ended. The "New Look" revolutionized women's dress and reestablished Paris as the center of the fashion world after World War II. 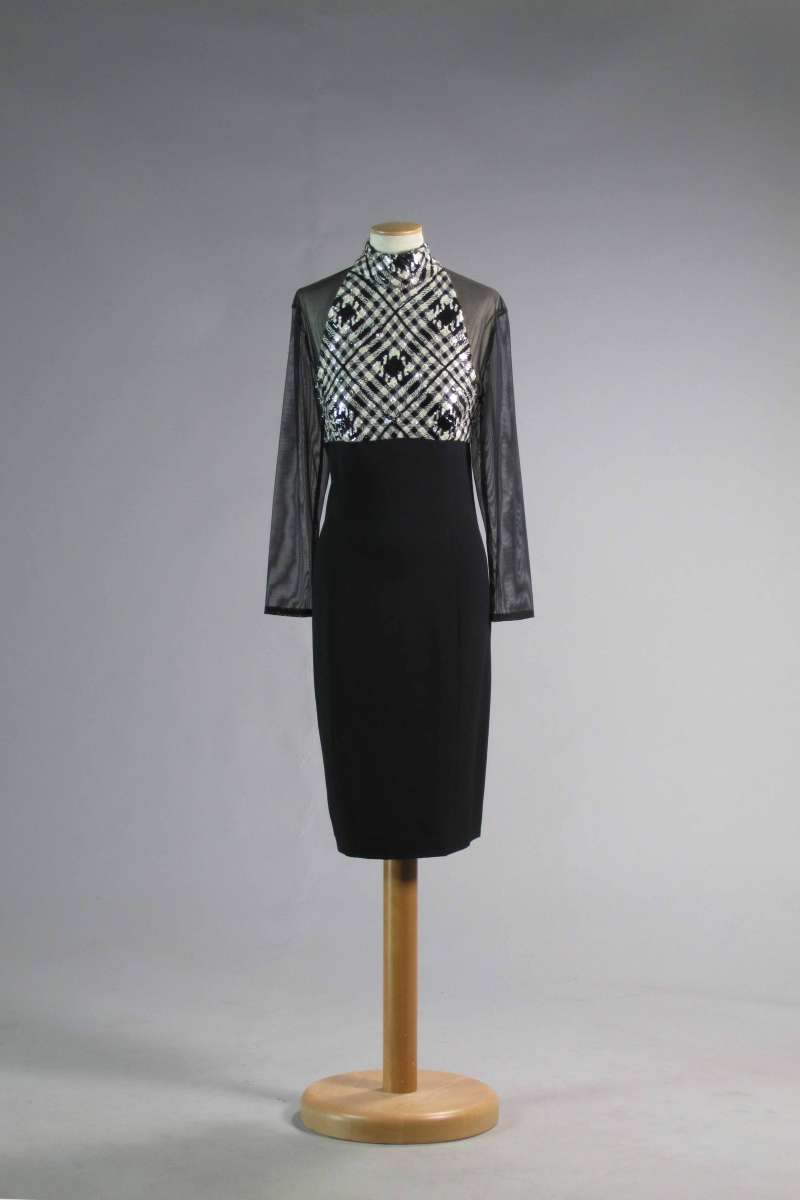 Black and white short dress, with long sheer sleeves that create a halter neck-effect with the wool checked bodice embroidered with black and white sequins and rhinestones, knee-length skirt made of silk crepe. Late Eighties [...]